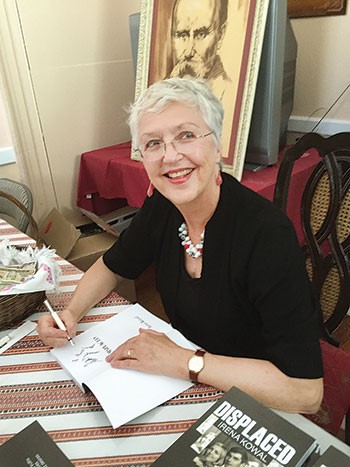 Irena Kowal autographs a copy of her new novel, “Displaced.”

Ms. Kowal’s presentation was sponsored by the Boston chapter of Friends of the Ukrainian Catholic University (UCU) in Lviv and more than $500 in donations as well as the receipts from Christ the King’s parish kitchen were collected and earmarked for the school’s Good Governance Program.

The Rev. Dr. Archpriest Yaroslav Nalysnyk, pastor of Christ the King, opened the afternoon’s session, welcomed everyone and then introduced Andrea Vayda, who spoke on behalf of the Friends of UCU.

“Irena Kowal is a noted author and playwright and she is no stranger to us in Boston,” Ms. Vayda said. “She is very active in our community, and she played a leading role in organizing our commemorations of the Shevchenko bicentennial. Although she grew up in New England and currently resides in the Boston area, Kowal spent a number of years living in England with her husband and two children and she also spent more than 12 years with them living in Kyiv. She authored the play ‘The Lion and The Lioness’ based on the diaries of Sonia and Lev Tolstoy, which was performed at the National Theater in Kyiv, and ‘The Marinated Aristocrat,’ which is currently in its 12th year in Kyiv. Her plays have also been performed In Krakow, Poland. Her novella, ‘The Barefoot Ballerina,’ was published in Kyiv.”

After this brief encomium, Ms. Vayda turned the podium over to Ms. Kowal who introduced her novel by explaining that the book is written in English with a parallel version translated into Ukrainian by Petro Taraschuk.

“ ‘Displaced’ is semi-autobiographical and yet it is a novel,” Ms. Kowal began. “What is most important for me as a writer, in Federico Fellini’s words, ‘is not what I want to say or remember or regret or rebel against, but what is primal and the reason why I create is the art, the craft of making up a world. It is here that I can play fast and loose with the characters, where they live between their dreams and their waking lives.’”

The novel deals with the struggles of four members of a western Ukrainian family: a father and mother, Josef and Marusia, and a brother and sister, Orest and Irena, as they deal with the issues of fear and powerless in the last days of World War II and the impact that decisions taken then have on their subsequent lives.

In 1944 Josef and Marusia decided to flee the advancing Soviet Army, leaving behind the 2-year-old Orest in the care of his maternal grandparents in the belief that eventually they would return. They did not know that their future involved a German refugee camp, the birth of a daughter there and, ultimately, permanent resettlement in the United States. While all this was happening, Orest and his grandparents were rounded up by NKVD in their purges of hostile elements in the newly conquered lands of Ukraine and sent to Siberia.

Ms. Kowal then explained that the first chapter of the novel actually was set in 1969 with the visit of Irena, then 22, to Soviet Ukraine and started with her arrival at Sheremetyevo Airport in Moscow, where she first met her brother Orest, 27. The rest of the book both chronicles the month-long trip that the two took of Ukraine and also looks at the events that broke up and scattered the family and caused lasting psychological scaring and trauma.

In conclusion, Ms. Kowal said that her work was an attempt in the struggle to overcome the fear and powerlessness ensuing from the Communist devastation of western Ukraine and its world and way of life after World War II. She closed by citing the Polish film director Agnieszka Holland, who said: “The tragic dimension of the Communist experience was neglected. That’s one of the reasons we are where we are. The past was never retold and analyzed and worked through in a psychologically therapeutic way. The silence, the guilt and bad conscience, made this past non-existent in some way. That leaves a deep wound and a kind of schizophrenia. On the one hand, we don’t want to see ourselves as collaborators, and on the other hand you cannot deny your life. How was it possible that most of the population was living in a kind of schizophrenic lie, and being happy somehow? How is possible that those who where responsible have never been punished?”

“Freedom is not simple and we need to address the questions Holland poses,” Ms. Kowal emphasized. “Communism cannot be obliterated suddenly and capitalism embraced.”

“A society needs to go deeply into its past and understand the social mechanism that influenced it and made it what it is. To continually take the role of victim without any control over one’s life or destiny; to see oneself as the prey of a more powerful aggressor is not a way forward,” Ms. Kowal underscored.

Following the reading and presentation, which took some 90 minutes, Ms. Kowal took questions from the audience and then remained for another hour autographing copies of her book.

“Displaced” is available from Amazon, Barnes & Noble and CreateSpace eStore.

The Ukrainian version, “Nezazemleni,” will be published in Kyiv in late July/early August and will be available throughout Ukraine as well as through Ukrainian booksellers worldwide. 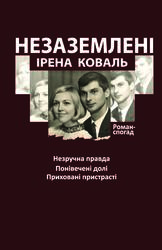 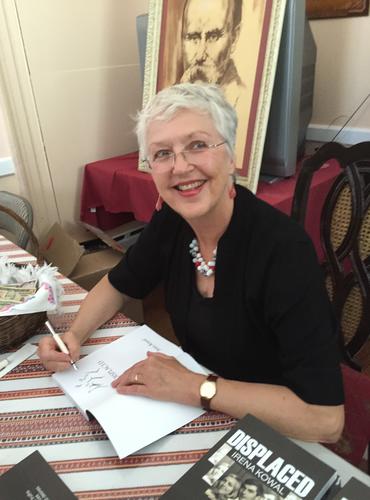